This is an audit, not a recount, but Democrats don’t want any of it. There was too much shady stuff going on and Democrats’ constant carping, complaining and obstruction gives them away. Each audit may very well be done differently based on state law and other factors. The Arizona effort has people going to door to door. This effort may have been allowed because it wouldn’t impact the November 2020 election.

The audit for truth

That maybe all this does since the outcome cannot impact the 2020 election, said Henry County Superior Court Judge Brian Amero. It might impact Fulton County officials due to their behavior. But there’s more than one audit happening.

There are a number of election related lawsuits going on. The Journal-Constitution reported, “Friday’s decision came in a lawsuit filed by nine plaintiffs, including Garland Favorito, a Fulton county resident and self-styled election watchdog. It’s one of more than 30 Georgia lawsuits stemming from the November presidential election and the January runoff for U.S. Senate. Some of the lawsuits are still winding their way through the courts.”

An audit is better than nothing

Former Senator Kelly Loeffler now leads a voter registration group. She was excited with the ruling.

“Voter confidence in our election system is the bedrock of our republic. Unfortunately, inconsistencies in Fulton County’s November 2020 absentee ballots cast serious doubt on voters’ faith in our elections. An independent investigation even characterized Fulton County’s absentee ballot handling as ‘generally bad management.’ While there is a dire need to investigate a number of other well-documented issues, we must also inspect Fulton County’s absentee ballots to reassure Georgians that their voices are heard and their votes are counted. The integrity of future elections is critical, and Judge Amero’s decision is a helpful step in restoring transparency, accountability, and voter confidence. We look forward to the findings and their role in promoting transparency and rebuilding faith in our elections.”

Not everybody welcomed the audit

So we might know the guilty parties in advance. Fulton County Commission Chairman Robb Pitts was furious. “It is outrageous that Fulton County continues to be a target of those who cannot accept the results from last year’s election. The votes have been counted multiple times, including a hand recount, and no evidence of fraud has been found. The fact remains that Fulton County safely and securely carried out an election in the midst of a public health crisis.” You can repeat daily that the election was fair but if your actions say otherwise, you won’t be believed.

Fulton County officials may have brought out hidden ballots after GOP observers had gone home, but that wasn’t the only problem. There were errors and crashes to the point of election officials voting to fire election director Rick Barron. Curiously, that decision was denied by the county Board of Commissioners.

Nearly 200,000 people have been evacuated in the Philippines due to a massive typhoon which has struck the…
byScott Moore 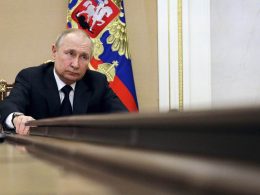