Black Lives Matter is such a scam

This has everything to do with tearing the country apart. Trump was doing too good of a job bringing us together. Democrats, liberals hate that, it takes their power away.

This woman will shame the daylights out of you, if you can still feel shame. We’ve been taught for years that shame is bad. Shame is what helps you learn right from wrong! If we’ve been raised right, we’ve all felt it at one point or another.

It’s not about the insurance

That’s just part of the cost of doing business anymore. It’s across the board, black, white or any other minority. Things happen and if the business can’t recoup the loss, they’re gone. If the rioters are looking to kill off jobs, capitalism, this is probably the way to be going. Some businesses were on the verge of closing due to COVID-19, this was just the final nail in the coffin.

Rioters have been told all their lives capitalism is bad. The rich steal from the poor! They’re greedy! Probably none of these rioters have spoken to a business owner. Even if they did, would the business owner be believed? There are industries with razor thin profit margins. Would the rioter assume the business owner was lying if the books were brought out for viewing?

For many small business owners, black, white or any minority, it’s their life’s work. They pour blood, sweat and tears into it. It’s a passion, something to be believed in. If possible, people would love to pass a thriving business onto their kids. It’s the opportunity to never be in poverty again.

Breaking into that business is like breaking into their home. You feel violated. It’s heartbreaking. Now you have to spend time cleaning and filling out that insurance paperwork rather than making money. For some, it can be the end.

Two scams aren’t needed but it’s what we have

Democrat run states are still locked down. If you can riot, you can work. Open the country. You can be arrested for opening your business but not for tearing one down.

Trump is more than willing to send out stimulus packages. He wants to help people pay their bills. But Democrats only want to help themselves and make Trump look bad any way they can. Democrats want to make it look like he’s to blame for not giving people the money they need when in truth Trump is angry the Democrats load up that stimulus money with pork that has nothing to do with COVID-19.

The irony of the situation was from de Bladio himself. When New York’s curfew kicked in, he said, “”Everyone, time to go home so we can keep people safe.” From what, the virus or rioting now? If we’re done with the virus, open New York up completely.

It's Confirmed: Riots Being Orchestrated By THESE Agitators

Detectives just found a missing teenage girl in the basement of a California home. The teen had been…
byStaff Writer 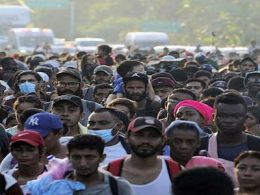