A reporter for the Associated Press, discussing police reform at George Floyd Square in Minneapolis, was appropriately interrupted by gunfire on May 25, the anniversary of Floyd’s death. Journalist Philip Crowther reported hearing as many as 30 shots at the scene, sending people scrambling for cover. George Floyd Square is the spiritual heart of the police abolition movement so periodic gunfire at the location is evidently something locals have accepted.

As the community gathered to honor George Floyd on the one year anniversary of his death, some locals decided that they could honor Floyd as he really would have wanted.

To honor his memory these individuals staged an apparent drive by shooting which left one individual with a non-life-threatening injury.

Police are now investigating the source of the gunfire and have stated that they have no information about the identity of the shooter or shooters at this point in time.

The mostly peaceful commemoration of Floyd was part of an extensive nationwide celebration which involved gestures from President Biden and Kamala Harris, who met with members of the Floyd family.

Legislation aimed at restricting or defunding policing activity in cities like Minneapolis is also thriving one year after the start of the campaign sparked by Floyd.

With these reforms crime has been increasingly rapidly in a number of affected cities, particularly violent crime and shootings.

Quick rough footage of the moment we heard shots fired at George Floyd Square. We counted 30 upon looking back at the footage. pic.twitter.com/oxGkLQru9Q

The irony of the situation should be unavoidable for anti-police activists; people calling for a decrease in policing were sent running for cover by random gunfire in broad daylight at the national focal point of the cause.

Minneapolis has repeatedly struggled to address the demands of BLM and related groups without allowing the city to descend into complete anarchy.

City authorities, who have often indicated their support for the cause, are apparently aware of the fact that Minneapolis desperately needs strong policing of some kind; the National Guard has frequently been summoned to the city throughout the last year.

There is no indication that the gunfire at George Floyd Square had anything to do with the ongoing protests there or the identity of the location itself.

The shooting appears to have been mainly a symptom of the new restrictions on policing being encouraged in Minneapolis. 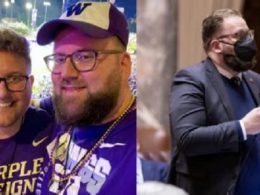