Black Lives Matter protesters have once again received  harsh lesson about the dangers of blocking traffic. During a protest in Minneapolis a car struck several people, killing one woman and injuring several others. While the motivations of the driver have not been announced, protesters in Minneapolis were engaged in looting and violence. After striking the protesters the driver was dragged from his vehicle and assaulted by an angry crowd.

Deona Knajdek was allegedly using her own car to blockade a road as part of a protest held in Minneapolis over the death of Winston Boogie Smith, who was killed in a shootout with U.S. Marshals.

Knajdek, according to her brother, positioned her car in the middle of a street to block traffic which hoped to pass through the crowd of protesters.

She was apparently standing next to her car when it was struck by the driver of an SUV for an unknown reason. Knajdek later died at a hospital.

Three other people were treated for injuries which were not life threatening. The driver has not been identified by police but apparently survived the crash without serious injuries.

Police indicated that there was some possibility of drugs or alcohol being involved in the crash, though nothing has been confirmed thus far.

Immediately after the accident the driver was dragged from his vehicle and beaten by a crowd of angry protesters before officers arrived and were able to take him into custody.

Cars striking protesters has become a common sight over the past year as large protests have invaded roads and highways.

While drivers are often accused of intentionally striking protesters in these incidents, drivers generally in such cases have received some sympathy from lawmakers.

Republicans in various states have led efforts to implement legal protections for drivers who injure protesters; activists themselves claim that blocking traffic is essential to spreading their message.

Whatever the motive of the Minneapolis driver, motorists have good cause when faced with BLM protests to feel that they are in physical danger if they stop or slow down for the crowds.

Drivers are often faced with the feeling that they and their families must either risk being dragged from their vehicles and assaulted  or must speed up and attempt to escape.

In spite of these frequent collisions, BLM protesters seem to have little interest in learning any lessons about blocking roads or standing about in traffic. 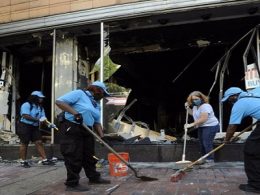