Though the main focus of the media and most of the American people is the presidential race, there are several toss-up Senate races that could determine whether the Senate stays under Republican control.

To regain the majority, Democrats would have to net three seats if Biden wins, and four seats if President Trump is reelected, as the vice president will be the Senate tie-breaker. The current Senate is made up of 53 Republicans and 47 Democrats.

Here are the key Senate races in tomorrow’s election according to CBS News:

Many see Democrat Senator Doug Jones’ time in office in Alabama to be a fluke. He won his position in a special election in 2017 after Senator Jeff Sessions left the Senate to become President Trump’s first attorney general. Jones won a narrow victory over Republican candidate Roy Moore, who was facing multiple allegations of sexual misconduct with underage girls during the election. In the 2020 election, Jones is facing a more formidable opponent: Tommy Tuberville, the well-known, well-loved former coach of the Auburn University football team.

President Trump had a 30-point margin of victory in Alabama in 2016, so Tuberville is expected to have a substantial advantage in this Senate race. According to nonpartisan election analysis site The Cook Political Report, the outcome of this race is rated as “Lean Republican.”

Republican Senator Martha McSally was appointed to Arizona’s second Senate seat after losing the race for the first Senate seat to Senator Kirsten Sinema by less than three points. This year’s election will determine whether she can keep her seat, in the race against Democrat Mark Kelly. Kelly is a former astronaut and the husband of former Congresswoman Gabby Giffords, a gun control activist who was shot in 2011.

The race has been tightening in Arizona over the last several elections, as Mitt Romney won the state in the 2012 election by 10 points, while Trump won a narrow victory by approximately 3.5 points.

According to polls by CBS News, Biden has a five-point lead over President Trump, 51% to 46%. The Cook Political Report rates this race as “Lean Democratic.”

Republican Senator Cory Gardner in fighting in a close race against former Governor John Hickenlooper. After attempting to run for president, Hickenlooper has decided to run for the Senate. Gardner is reportedly one of the most vulnerable Republican Senators up for reelection this year, as he is the only major elected GOP official in Colorado at the moment.

Thanks to a contentious special election, Georgia has two high-profile Senate seats at stake in this year’s election. Republican Senator David Perdue is defending his seat from challenger Jon Ossoff, a Democrat who unsuccessfully ran for the House a few years ago.

According to Cook Political Report, this race is rated as a “toss-up.”

Republican Senator Kelly Loeffler, who was appointed to fill her seat in December 2019 when Senator Johnny Isakson retired early, is running in a close special election race against two major opponents: Republican Congressman Doug Collins, and Democrat candidate Reverend Raphael Warnock. Due to the fact that two Republicans are running in the race, it is unlikely that Loeffler will win 50% of the votes. The top two vote-getters in this election will end up in a runoff on January 5.

Republican Senator Joni Ernst is running a close race against Democrat Theresa Greenfield. Greenfield has outraised Ernst in this year’s race, and could end up outspending the Republican incumbent by more than $25 million by Election Day.

Senator Susan Collins, who is running for her fifth term, is one of the most “moderate” Republicans in the Senate. Collins was recently labeled a traitor by many within her party due to voting no on the confirmation of now-Supreme Court Justice Amy Coney Barrett. She is also facing considerable skepticism from Democrats and independents who previously supported her.

Collins is running against State Speaker of the House Sara Gideon, a Democrat who has posted record fundraising.

First-term Democrat Senator Gary Peters is up for reelection against Republican John James, an army veteran who unsuccessfully ran for Senate in 2018.

First-term Republican Senator Steve Daines is being challenged by the two-term governor of his state, Steve Bullock. Like Hickenlooper, Bullock briefly ran for president before dropping out and entering the Senate race. According to CBS News, “Bullock won reelection in Montana as a Democrat in 2016 even as Donald Trump won the state by about 20 points.”

The Cook Political Report is also calling rates this race as a “Toss-up.”

Lindsey Graham, Chairman of the Senate Judiciary Committee, is facing a closer than expected reelection race. His opponent, Democrat Jaime Harrison, is the former state Democratic Party chair, and an African American candidate in a state where 30% of the population is African American.

They Found Her Dead... in His Room 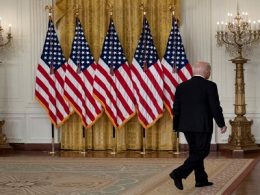 Despite the substantial amount of voting irregularities in the election, Joe Biden has already picked his chief of…
byAnastasia Boushee