California may have rabid liberals in the cities but the rural sections of the state are going to have a little more common sense. ANTIFA is sent in to intimidate. It’s tough to intimidate when you’re outnumbered by the opposition! Judging from news, you wouldn’t expect anybody in that state to support Trump. There’s a lot of city to California, but there’s also a lot of country to that state. Country folk will survive.

Trump supporters are positive and excited about the future. Liberals and progressives love to talk positivity until they discover you believe differently then they do. Then you have to be shut up. No differing opinions than ours, please!

ANTIFA doesn’t have a positive rallying cry! They advocate for death to cops and four letter words, among other things. You can hear the pride and excitement bubble up in the “USA” chant.

Counter protesters have arrived and BHPD in riot gear form a line between the rally pic.twitter.com/uY5XPJ7EYK

While Trump supporters are going to be filled with joy. How can you not be joyful with a bright future on the horizon? Hope is an amazing thing!

Based on what Trump has done so far, there’s no reason to expect anything less. He’s already kept promises he makes, something politicians can’t do!

ANTIFA is often paid to be there

A man protecting his home is ten times more likely to put in effort than somebody who’s paid to be there. One video showed a Halloween theme among some who attended.

Social media isn’t happy. Conservative videos are being scrambled. All the work that’s been done to somehow bring Trump down and he may get reelected in a landslide no less. The media has been rendered useless and they’re furious.

Like pollsters when Hillary was soundly defeated in 2016, the media may also have to justify their existence. There are many alternate news sources out there as a result. As Trump himself put it, “I ran because of you, Joe.” 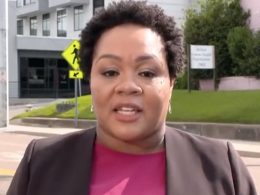 The CEO of mortgage company  Better.com invited more than 900 employees to a Zoom call to inform them…
byStaff Writer