National Public Radio admits, “casual observers might conclude” that the taxpayer funded outlet “is more interested in fact-checking conservative viewpoints than liberal viewpoints. Or possibly, that bias on the part of NPR staff interferes with their judgment when spotting suspect information.” The far left-leaning network loves to fact check conservatives but the tables were turned when an alert reader questioned some of their progressive facts. They were forced to apologize that one of the authors they interviewed is totally full of sh*t.

In a newsletter on Thursday, responding to a complaint from a reader, the National Public Radio’s “Code Switch” section explained how an interview with a left-wing author who defended looting was allowed to cross an ethical line. NPR admits that the person who complained is absolutely right that “news consumers are watching closely to see who is challenged and who isn’t.” In “this case a book author with a radical point of view far to the left was allowed to spread false information.” The liberal suggested that “small business owners were not part of the community,” so “looting businesses is ultimately about attacking ‘modes of oppression,'” which makes it just fine.

A “Public Editor” for NPR, Kelly McBride, admitted to their readers that while she didn’t edit that particular story, the interview with a left-wing author who defended looting “contained false information” which ultimately didn’t “serve” their liberal community. When McBride took a hard look at what they published, she realized that “some of author Vicky Osterweil’s claims” in the print interview, “contradict NPR’s previous reporting.” She also notes, “the author’s characterization of the Civil Rights Movement is a distortion and oversimplification.”

The NPR Code Switch team, she assures, “has a strong track record of presenting rigorous academic ideas that explain race, explore racial disparities and float interesting observations about social divisions.” Because of that, “a book that explains looting, even defends it, seems like appropriate material.” Where things went wrong was in the interview. The author “made several statements in support of her hypothesis that could be easily fact-checked” but they weren’t. Steve Drummond, the editor of “Code Switch,” admitted to McBride that “while the piece went through fact-checking, we should have done more.”

New version of the story

NPR thinks they can make everything all right by switching a few words around but they don’t give their conservative adversaries the same opportunity. They just get the thugs to totally gray out social media posts which are declared even “partly false.” A new introduction was added, McBride explains, “to provide more context and prepare the reader to digest the author’s ideas.” They know that’s not nearly enough.

“Still, this failure to challenge this author’s statements is harmful on two levels. Publishing false information leaves the audience misinformed. On top of that, news consumers are watching closely to see who is challenged and who isn’t. In this case a book author with a radical point of view far to the left was allowed to spread false information.” The updated version, which NPR published September 1, warns that the original introduction to the interview lacked sufficient context for readers to “fully assess some of the controversial opinions discussed.”

DailyWire went through and compared the two versions. NPR started the makeover with the title. “One Author’s Argument ‘In Defense Of Looting,'” became a “controversial view” in defense of looting. Nobody mentioned in the first version of the article that the author was “a self-described writer, editor and agitator who has been writing about and participating in protests for years.” Where the original noted that liberals felt a little uncomfortable about the peaceful protests, they caused “a lot of hand-wringing about looting.” The sentenced was changed to “condemnation of looting.” The government officials who previously “bemoaned” the property damage now have “denounced” it.

Looting is a powerful tool

The word “says” becomes “claims” in this paragraph: “The rioters who smash windows and take items from stores, she says, are engaging in a powerful tactic that questions the justice of ‘law and order,’ and the distribution of property and wealth in an unequal society.” NPR did a major rewrite to the section which used to say, “I spoke with Osterweil about this summer’s riots, the common narratives surrounding looting, and why ‘nonviolence’ can be a misleading term. Our conversation has been edited and condensed for clarity.” It’s a lot shorter now. “I spoke with Osterweil, and our conversation has been edited and condensed for clarity.”

Race Baiting Professor: 'They Have Deputized ALL White People to Murder Us' 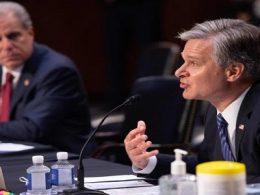