The FBI made a stunning arrest on Friday in Puerto Rico, when they put the cuffs on a former DEA agent turned snitch, Jose Irizarry. He was working directly with Columbian traffickers to refund half of all the “laundered” millions the drug police seized. Once again, the rats were in charge of guarding the cheese. Irizarry would still be happily defrauding the public if it wasn’t for President Trump.

Federal prosecutors unsealed an indictment on Friday, after Jose Irizarry and his wife Nathalia Gomez-Irizarry were arrested in Puerto Rico the same day. The Federal Bureau of Instigation charged the former “decorated” agent of the Drug Enforcement Administration with 19 counts of fraud, conspiracy and identity theft. According to the reports, he conspired with the Columbian cartel to steal millions from the U.S. government.

Basically, the double-crossing snitch would run sting operations to steal cash from the Colombians, then steal half of it back from the DEA and return it to the Colombians, keeping a cut for himself and his wife. The way prosecutors explain his “Colombia-based drug trafficking and money laundering organization,” Irizarry had been “enriching himself by secretly using his position and his special access to information.” It bought him “a lavish lifestyle of expensive homes and cars and a $30,000 Tiffany ring.”

The DEA is supposed to use extra precautions whenever they run this particular type of undercover operation because black ops like this could easily fund a shadow government like Oliver North was running in the 1980’s. As described by Reuters, “agents pose as money launderers, collecting cash from drug dealers and funneling it through undercover bank accounts.”

Irizarry split half of what came in off to “accounts he and other conspirators controlled.” In 2013, “Irizarry helped collect nearly $1.1 million from suspected drug dealers that was deposited into undercover DEA bank accounts. Irizarry then had more than half of that money wired to accounts controlled by one of his associates.”

In 2015, he scammed Dutch drug dealers out of “more than 1 million euros in ‘bulk cash.'” He instantly “had $141,000 wired to a car dealer for himself and the head of the Colombian trafficking group.”

President Donald Trump has been shaking things up all over after being vindicated by the Senate. This is exactly why he’s been making such a big deal out of weeding out deep state corruption. It’s also not the first time the Puerto Rico branch of the DEA got caught with their hand in the cookie jar. Only last week, another former drug cop was sent off to prison for his part in a cocaine smuggling operation. He helped them get “thousands of kilograms of cocaine from Puerto Rico to New York.”

Black Lives Matter protesters have once again received  harsh lesson about the dangers of blocking traffic. During a…
byScott Moore 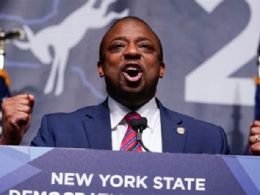