France can be a prickly ally at the best of times and a wise leader must always be careful to avoid offense if they hope to maintain good relations with the French. The Biden administration has, unsurprisingly, been exceptionally careless and disrespectful in its treatment of the French and now Secretary of State Anthony Blinken is reduced to begging in Paris for a patching up of relations with an angry French government.

France left in the dark

The direct cause of the French outrage is the loss of a lucrative contract to build submarines for Australia. Without giving France any warning the deal was canceled and it was decided that Australia would instead be supplied by the United States.

French President Emmanuel Macron was so outraged by this announcement that he recalled his government’s ambassadors to both Australia and the USA.

When Macron finally agreed to accept a call from President Biden he was apparently not satisfied with the president’s admission that Paris should not have been kept in the dark.

Talks with Macron and other French leaders have reportedly not made much progress in repairing the damaged relationship.

Macron, who has received support from other leaders in the European Union, has made it clear that conciliatory words from the White House will not be enough for his government.

The French ambassador is now back in Washington and planned talks are proceeding but it is obvious that Macron is still very irritated and not yet ready to forgive the slight.

The spat goes beyond the immediate cause of a broken submarine deal and a failure to inform France about American efforts to replace it with a new arrangement.

France is a longtime ally and a major world power. Anger over the submarine feud represents a deeper hostility to the way in which the Biden administration is treating its allies.

Breaking up an agreement between two friendly nations with no warning is not good foreign policy if there is any intention of maintaining good relations.

Biden and Blinken have subsequently shown that they do not want to cause long-term damage to relations with France.

This reveals a developing theme in Biden foreign policy which has angered Macron and others; the White House assumes that it can do whatever it wants abroad and that allied nations will fall in line.

Biden took France for granted, treating an allied nation more like a vassal state than an independent power with interests and aspirations of its own. The White House seems to forget that it can’t simply do whatever it wants in foreign policy if it wants to keep crucial alliances intact.

Remember when BLM rioters were burning down cities and Colin Kaepernick literally called for more violence? And then,…
byRyan Michael 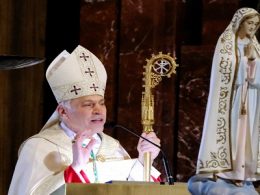