Joe Biden has signed over 50 Executive Orders since being sworn in. He’s all about reversing as many of Trump’s accomplishments as possible. It has nothing to do with governing the country. Obama appointed “czars” which are more appropriate for a kingdom than a representative republic. The United States Constitution was deliberately set up to avoid a kingdom, we needed the checks and balances of state representatives to do things.

Biden and Democrats just want to raid the United States

We can become Venezuela if abuse of power isn’t dealt with. It won’t take long. If laws aren’t going to be enforced equally across the board, they mean nothing and our republic is gone. In another couple of executive orders, Biden created a Gender Policy Council and undid a regulation that Betsy DeVos had put together.

Biden stated, “In our nation, as in all nations, women have fought for justice, shattered barriers, built and sustained economies, carried communities through times of crisis, and served with dignity and resolve. Too often, they have done so while being denied the freedom, full participation, and equal opportunity all women are due.”

Joe may continue to override the House and Senate

The Courts have been overruled and threatened. There maybe many cases they can’t even look at, they’d be too politically damaging. Council co-chair Jennifer Klein just admitted it’s essentially another section of government by including men. “We are very inclusive in our definition of gender. We intend to address all sorts of discrimination and fight for equal rights for people, whether that’s LGBTQ+ people, women, girls, men”. The focus is on “policies to advance equity for Black, indigenous and Latina women and girls of color.”

Biden’s statement continued with a nod to COVID, “No country can recover from this pandemic if it leaves half of its population behind.” But that’s exactly what you’re doing, Mr. Biden. 75 million people voted for Trump, that includes minorities.

And people are easily corruptible. Biden’s just along for the ride and he’s accidentally said as much. Obama and Pelosi are pulling his strings. If Trump made the order, it needs to be undone, regardless of whether it was a good idea or not.

The second executive order he signed was a regulation Betsy DeVos had a hand in. Betsy’s granted more protection to those accused of sexual assault. Although Biden’s order instructs the Dept. of Education to guarantee non discrimination, there may not be any teeth to it. Co-chair Klein explained that the Biden order, “asks the secretary of education to consider whether to rescind or revoke anything immediately.” There’s no time line as to how quickly the regulations would be undone. 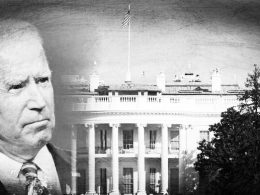