The world saw what happened that day and what continues to happen so her words and presence ring hollow. The world saw Trump do things that supposedly couldn’t be done. But Pelosi hated him and refused to work with him. A successful New York businessman with the power of the most powerful country in the world was able to, among other things, arrange for peace in the Middle East.

But Pelosi wanted her money and power

And she wants her wars. There’s distraction and money there too. Likely countless nations see it. The UK appears to be the most vocal with their disgust.

The United Kingdom recently had a conference for the Group of Seven nation’s heads of parliament. When it was her turn to speak she may have acted like she was still in the United States, bashing Trump and Republicans.

Pelosi: Yes, China's committed “genocide” against the Uighurs; “having said that," the bigger, “overrriding" issue is “working together on climate” pic.twitter.com/xfk2jPgXTH

But maybe not here. Cambridge University had a moderated conversation in which she thought the Republican party had become a “cult”. She wanted Republicans to “take back their party”. “I say to my Republican friends – and I do have some – take back your party.”

“Working together” doesn’t mean the same thing for Pelosi. That laughter may have been a surprised, “You have Republican friends?” Who needs enemies when you have a friend like Pelosi? The gentleman sitting next to her sometimes looked uncomfortable.

She shrugged off the Chinese government’s genocidal efforts toward the Uighur population in the name of the Democrats’ cult, climate change. “Having said all of that …we have to work together on climate. Climate is an overriding issue and China is the leading emitter in the world, and the U.S., too, and developed world, too, but we must work together. So we can have a level of communication, whether it’s COVID, whether it’s terrorism, or whether it’s climate.”

Pelosi has no need for class. She has her money and power. You refused to communicate with Trump, Nancy. Because Biden is a Democrat and does what he’s told, he’s perfect. Americans are still trapped in Afghanistan, Nancy. Now two top Democrats are heckled. We just need to increase the volume. 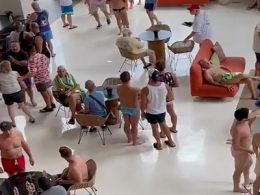 It’s important to always keep in mind that Mexico is Mexico, regardless of how rigidly sequestered a resort…
byStaff Writer