Liberals became so unhinged when the former Governor of South Carolina turned U.S. Ambassador to the UN, Nikki Haley, declared that the United States wasn’t a racist nation, a liberal commentator on Fox News jumped the gun and put out a racist tweet in response. “Says a white woman.” After her facts were checked and found lacking, Leslie Marshall deleted the tweet and blamed in on an overzealous staffer.

Nikki Haley has liberals losing it

The things Nikki Haley had to say in her speech to the Republican National Convention rattled Democrats so hard they don’t know what to say. “One of my interns, posted a tweet about Nikki Hailey [sic] that was untrue. He didn’t know of her ancestry. It was brought to my attention, so I took it down immediately. My in-laws know Nikki parents, my husband’s Indian. Sorry to disappoint the haters time to move on folks.” If Hannity or one of the conservatives made a comment like that about a Biden supporter you can bet it would saturate the airwaves for days.

Ms. Marshall’s “intern” should have read the transcript of Haley’s speech before tweeting. “This is personal for me.” She declared her pride as the “daughter of Indian immigrants.” The family settled in a small southern town. “I was a brown girl in a Black and white world. We faced discrimination and hardship, but my parents never gave into grievance and hate. My mom built a successful business. My dad taught 30 years at a historically Black college. And the people of South Carolina chose me as their first minority and first female governor.”

“It’s so tragic to see so much of the Democratic Party turning a blind eye towards riots and rage,” Haley insists. “Of course we value and respect every Black life. The Black cops who have been shot in the line of duty, they matter. The Black small business owners who have watched their life’s work go up in flames, they matter. The Black kids who’ve been gunned down on the playground, their lives matter too. And their lives are being ruined and stolen by the violence on our streets.” 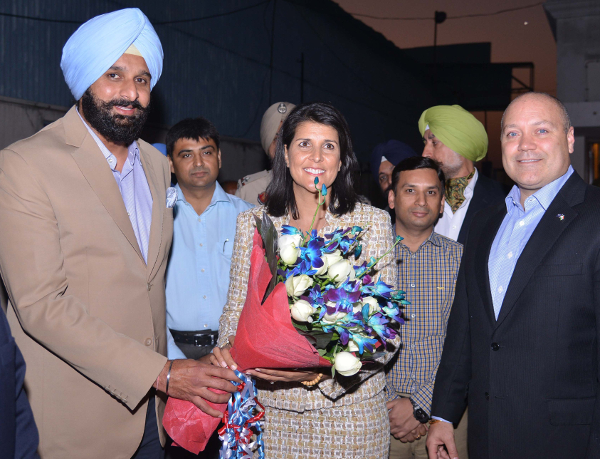 Democrats all blame America for everything

Channeling former UN ambassador Jeane Kirkpatrick, Haley started her speech reminding everyone that nothing has changed since Ronald Regan was president. When Kirkpatrick stood on stage at a GOP convention for Reagan’s second term, “she called out his Democratic opponent, a former vice president from a failed administration. That ambassador said, and I quote, ‘Democrats always blame America first.'” As Haley made crystal clear, “Joe Biden and the Democrats are still blaming America first. Donald Trump has always put America first. And he has earned four more years as president.”

The United Nations, Nikki Haley asserts, is “a place where dictators, murderers, and thieves denounce America, and then put their hands out and demand that we pay their bills. Well, President Trump put an end to all of that with his leadership.” Trump did what Barack Obama and Joe Biden refused to do, stood up for America.

“Everything we did happened in spite of Joe Biden and his old boss. We cut taxes. They raised them. We slashed red tape. They piled on more mandates. And when we brought in good-paying jobs, Biden and Obama sued us. I fought back, and they gave up.” Should Pelosi, Sanders, and the Squad take over, “their vision for America is socialism. And we know that socialism has failed everywhere.” Nikki Haley isn’t about to let that happen if she can help it.