President Donald Trump is absolutely right to reassure the public that everything is under control and there is no need for panic. We need to keep things in the proper perspective. Shutting America down in fear plays straight into the hands of evil forces of darkness who want to destroy our great nation. This is the time for determination, not intimidation. The show MUST go on!

Our President is right – America’s open for business

Despite all the scary things that the main stream media is bombarding the public with, there isn’t any real cause for alarm. There have been some mistakes but were doing the important things right. As Franklin D. Roosevelt so eloquently assured America in March of 1933, “The only thing we have to fear is fear itself.” If we all hide in our homes when there isn’t a good reason to, it does unnecessary damage.

Of course, some hot spots have developed, and folks near known cases do need to use extra precautions. The rest of Americans aren’t within miles of a virus case and should be leading their normal lives. Yes, there have been serious lapses in the response which led to additional spread of the outbreak. These things are to be expected and should be treated as a learning experience. Fortunately, we’re not dealing with Ebola. This is not a drill but what we learn now could save millions of lives later.

The network media is all totally controlled by liberals who favor the new world globalist order so it’s no surprise that they are taking every opportunity to blast the Trump administration for every tiny little flaw they can expose. They never say what the team is doing right. It simply isn’t fair. For example, they’re tearing him apart for saying there isn’t any reason to stop holding Trump rallies. “Good Grief!” They scream, “Trump wants to get everyone infected.” No, Trump calmly explains. Why cancel a perfectly good rally without a good reason. Just don’t schedule any near Kirkland, Washington.

A well known germophobe, President Trump is setting the example by remaining calm in the wake of more liberal gasoline on the fire. One of the attendees at the conservative CPAC conference has tested positive for the virus. He was never in the main hall but did shake hands with someone who shook hands with the President. “I’m not concerned at all” he told reporters at Mar-a-Lago. He’ll be alright.

George Soros was planning for this very moment

Looking at the big picture, the only ones who stand to benefit from this disaster are the open borders globalists. George Soros declared war against China’s economy last year. This year, just as the word “coronavirus” was first showing up in the media, Soros gave President Trump a thinly veiled warning on January 23rd at the world economic forum in Davos, Switzerland.

“Trump’s economic team has managed to overheat an already buoyant economy,” Soros warned his guests at an informal dinner. “The stock market, already celebrating Trump’s military success, is breaking out to reach new heights,” he noted. “But an overheated economy can’t be kept boiling for too long. If all this had happened closer to the elections, it would have assured his reelection.”

“His problem is that the elections are still 10 months away, and in a revolutionary situation, that is a lifetime.” He also remarked, “This doesn’t mean that those of us who believe in the open society should remain passive. The reality is that we are in a Cold War that threatens to turn into a hot one. On the other hand, if Xi and Trump were no longer in power, an opportunity would present itself to develop greater cooperation between the two cyber-superpowers.”

If the American economy were to grind to a halt, like it did in China, it would prove George Soros right. Patriotic nationalist deplorable Americans can’t let that happen. It’s your duty as an American citizen to do your part and live as close to a normal life as possible, while remaining ever vigilant and taking the necessary precautions. Sooner or later this will all be over and the final cost shouldn’t be much worse than what we bear in a typical flu season. Next year, we should be better prepared with vaccines if the virus manages to make it back around again. In the meantime, the show must go on. 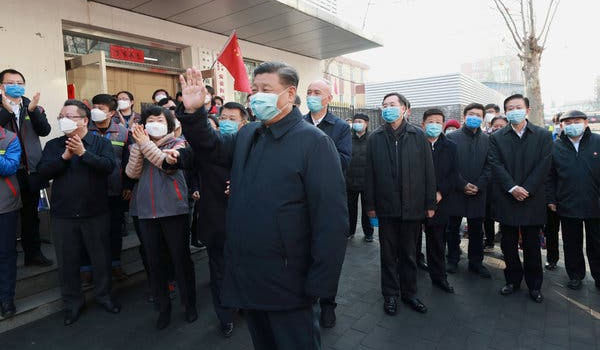