Horrifying scenes from Hamid Karzai International Airport are revealing the extent of the catastrophe unfolding in Afghanistan. The Kabul airport is the NATO position left in the entire country; over the course of the last two days it has also become completely surrounded and cut off by Taliban forces. The airport is now the only way into or out of Afghanistan for tens of thousands of people who are now desperately flooding the runways.

Last chance to escape from Afghanistan

Promises made in July by  President Biden that Americans would not see a repeat of the Fall of Saigon, with people clinging to helicopters and trying to escape from the embassy, have been disastrously answered by events in Afghanistan.

The thousands of American soldiers and marines who had been ordered to Kabul in recent days are nowhere to be seen as the airport continues to descend into chaos.

Earlier scenes of NATO troops firing warning shots into the air to hold off mobs of fleeing Afghans have evolved into scenes of those same mobs climbing on planes and blocking runways today.

Evacuations are currently paused completely with thousands of Americans and allied citizens still trapped in the country.

Many of those citizens are apparently stuck behind Taliban lines and cut off from the dubious safety of the airport; these individuals are struggling to find anyone to contact and the State Department and Pentagon do not appear to have any plan to help them at the moment.

A joint statement confidently assures Americans that steps are being taken to secure the airport and move thousands of people out of Afghanistan in the coming days, but concrete information and leadership from the government has been largely absent.

Panic and chaos at the airport

Despite the large contingent of NATO forces being sent to the airport it is clear that there is currently no secure location in Afghanistan for opponents of the Taliban.

While rumors of a deal being made with the Taliban to allow the evacuation to proceed are unconfirmed, it is clear that the operation is taking place completely at their mercy.

There appears to be no solid perimeter left at the airport and, in addition to deaths caused by stampeding civilians, there have been shooting deaths reported within the airport itself.

One video shows a horde of men clinging to the exterior of a US Air Force C-17; another video appears to show some of those men falling to their deaths after take-off moments later.

The Biden Administration has been consistently assuring the world that this would all be handled in an orderly and safe fashion. Top administration officials are now becoming increasingly reticent about their Afghanistan disaster.

For now it appears that the Taliban does not want to impede the NATO evacuation; the new rulers of Afghanistan have evidently decided that the situation is already humiliating enough for the West. 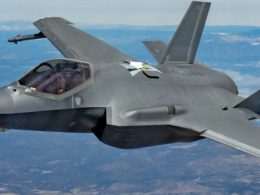 Nearly 200,000 people have been evacuated in the Philippines due to a massive typhoon which has struck the…
byStaff Writer