Sometimes people have the option to confront Biden. A father who’s son was killed in the 2018 Parkland shooting was an invited guest at the event celebrating new gun legislation becoming law. The guest didn’t think Biden had done enough and that this was all show. The crowd agreed with the guest. There was applause as Manuel Oliver spoke out against the President. The administration needs to do more.

Oliver spoke out against Biden

He yelled at the President, “You have to do more than this!” Biden responded with, “Sit down, you’ll hear what I have to say.”

But Oliver insisted, “You have to open an office in the White House! I’ve been trying to tell you this for years! And years!” Although the President offered to let Oliver talk, he was escorted out.

Biden to protester who interrupts his speech: "Sit down. You'll hear what I have to say."pic.twitter.com/K0pgkUkUoa

Oliver interrupted the event because “it was my chance to say something to the president, and that’s a chance we don’t have every single day. That’s pretty much what this is about. There’s nothing to celebrate. It’s a big lie. We lie between ourselves thinking we have a solution to this when we actually don’t. There was no need for this event at all.”

Whoever controls the teleprompter is the real President! pic.twitter.com/1rcqmwLe9S

Biden had a number of embarrassing moments. Among them was appearing to read too much from the teleprompter, prompting widespread mocking.

"…to terminate the presidency…" pic.twitter.com/AG5vOa1DBh

Elon Musk was among those who suggested that, “Whoever controls the teleprompter is the real President!” Biden had a tough time with some words.

The President’s medications may need adjustment

A number of words were off. He tried to talk about the 50 “straits” of America.

He spoke of a 10 year old who needed to travel out of state for an abortion. He wasn’t able to say “pregnancy”, it instead came out as “presidency”. It sounded like he said, “10 years old, and she was forced to have to travel out of the state to Indiana to seek to terminate the presidency and maybe save her life.”

Outcry Erupts Over Kids Being FORCED to Walk Through... 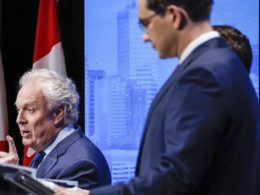