The cancel culture hasn’t gone away and it’s due to this culture that alternate outlets are formed. Mike Lindell, the CEO of My Pillow, announced to RSBN that he’d been canceled from 12 TV stations. He’s been non stop and insistent on the 2020 election fraud so many people witnessed. Liberals and progressives hate him and want him hit in the wallet so he might shut up. But he’s not going anywhere.

He talked to RSBN’s Brian Glenn in Michigan, “I had 12 TV stations, just the other day now, say that I couldn’t be in the commercial – [the commercial] can only say MyPillow. I cannot personally be in them.”

He said we need to keep opening our mouths, we shouldn’t be silent. Corporate box stores don’t want him. “I want you to think about that. Where they’re coming to cancel out this country – you know, they want my voice stopped…everybody’s gotta speak up.”

They will stop at nothing to stop him from spreading the truth about 2020.

SUPPORT Mike Lindell by using code RSBN for up to 66% off your entire purchase! https://t.co/toHXT7LB5d pic.twitter.com/tzHNKsmdoj

Places that have banned him will not see his business again. The 12 TV stations that discontinued him will “never get to sell my product again. Just like those box stores. When you leave, it’s goodbye. Have a nice day.”

Voting used to be done by pen and paper in a private booth. We need to go back to that. He filed a class action lawsuit against the voting machines. Lindell also spoke in Arizona previously, “It’s the most important class-action lawsuit in American history – in world history. This will get rid of the machines. They’re considered defective devices…a defective product.”

Lindell is putting money into that lawsuit

His customers are helping to support that. He said, “You buy the products, you buy the slippers…buy everything we make, you’re not only supporting getting rid of the machines, [and] everything we’re doing to save our country, but you’re getting a good product…I’ve never asked for help other than to buy my products.”

Finally, he revealed that both California and Texas were in on the vote fraud too. Trump had 1.5 million votes stolen from him in California. Texas had a bit less, or 960,000 that were taken from him.

Top US Universities Conspired, Accused of Being 'Cartel' 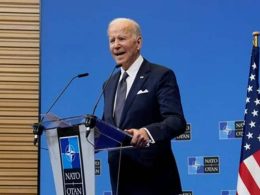