It’s not the party of JFK anymore. If you’re conservative, there’s no place for you in the Democrat party. As a result, North Las Vegas Democrat Mayor John Lee made the switch to Republican for the governor’s race. The Democrat party has so heavily moved toward socialism and centralized government power that defections have increased. Biden hasn’t been good for Democrats.

Republican is the opposite

He can’t deal with their elitist agenda anymore.

“They had an election recently for leadership, and four of the five people were card-carrying members of the Socialist Party. It’s not the party that I grew up with 25 years ago in this environment, and it’s not the party I can stand with anymore. The working class, or working men and women of this country, and also the small business owners are not a part of the conversation anymore. It all has to do with the elitists and it has to do with the socialists. That is not the agenda that I have in mind for this country of the future. When you’re a pro-life Democrat, a pro-gun Democrat, and you’re a very conservative person, that’s not really well known in the Democratic Party anymore. And so for me to hang on as long as I did, hoping the party would change, it didn’t, it got worse. So, therefore, I found a new place that I can put my allegiance to and help. Once again, forget about the last eight years. It’s the next four years that predict the future.”

The Republican tent is wide and long

And welcomes everybody. The Democrat party is moving so far to the left more people are leaving to anything but, including to neutral.

The Nevada Independent talked of the defections. It’s unknown whether this will make a difference but it certainly points to the current administration’s failures.

“Very little change in the trend established months ago, with four times as many Dems switching to GOP in May as vice-versa. The numbers are relatively small — still in the hundreds. But more Dems also are fleeing their party and registering as indies, too, by close to 2-to-1.  Will it make a difference at all, and are some of these just getting into the GOP to vote in the major contested primaries next month? Hard to tell. But if you look at the aggregate numbers for the last quarter, you’d rather be the Rs than the Ds.

All this has been going on for some time.

“The numbers continue to only be in the hundreds, but they are adding up in party switching — three times as many Dems switching to GOP as Repubs going to Dem again in March, via the SOS. Maybe some Dems just want to vote in the two major contested GOP primaries in June — maybe — but this is consistent for months now. All major party branding problems are equal, but some are more equal than others. More than two and a half times as many Democrats have switched their voter registrations to Republicans as vice-versa during the last three months, a statistic with ominous portents for Democratic candidates. The numbers since September also show that one and a half times as many Democrats switched to nonpartisan as did Republicans – numbers also reflected in how many major party voters would rather be members of “The Jedi Party” or some other minor or essentially nonexistent party.”

These Leftist Media Outlets Should Start Counting Their Final Days... 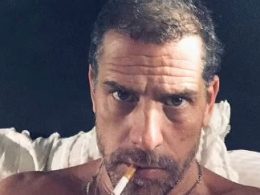