The Save Women’s Sports Act passed in the Oklahoma House by a vote of 79-18 a week prior to being signed, and was approved by the state Senate soon after.

The legislation reads in part, “athletic teams designated for ‘females’, ‘women’ or ‘girls’ shall not be open to students of the male sex.”

Opponents of the bill denounced the law, claiming that it was contrary to federal civil rights law.

“Ultimately, SB2 violates the United States Constitution and federal civil rights law, puts Oklahoma at risk of losing federal funding, and harms transgender youth, all to solve a problem that does not exist,” Tamya Cox-Toure, head of the American Civil Liberties Union’s (ACLU) Oklahoma chapter, said in a statement.

With Governor Stitt’s signature, Oklahoma is now the thirteenth state to pass a ban on the participation of “transgender” athletes in women’s sports.

On Friday, March 25th, the Utah legislature passed a similar bill by overriding Governor Spencer Cox’s veto earlier last week. Cox, a Republican, claimed that the state’s bill was disproportionate given that just four students out of roughly 75,000 student athletes in the state are transgender.

“Four kids and only one of them playing girls sports. That’s what all of this is about. Four kids who aren’t dominating or winning trophies or taking scholarships,” Cox wrote in the letter explaining his veto.

Indiana governor Eric Holcomb, also a Republican, vetoed similar legislation in his own state last week. Attempting to explain his decision, Holcomb claimed that the legislation could face lawsuits and that the authority governing Indiana high school athletics had not found “a single case of a male seeking to participate on a female team.”

Craig Shirley said Trump needs to talk to different people if he wants to win the next election.…
byPatti Walbridge 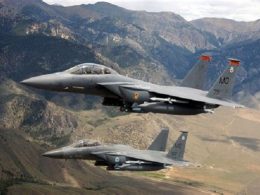 There are things Biden isn’t able to do that will regularly be put in his face. Taking care…
byPatti Walbridge

Biden Has Agreed to Pay Reparations…