MSNBC personality Nicole Wallace, like much of the leftist media today, is telling blatant lies about the teaching of critical race theory in Virginia schools. Like many Democrats, Wallace is blaming the massive upset in Virginia on a supposedly false narrative spread by Republicans about something which isn’t actually being taught in schools. Documents which became public knowledge recently prove that McAuliffe’s Virginia did push CRT in public schools.

It is hard to figure out what the accepted narrative is supposed to be in regards to critical race theory. The media apparently wasn’t able to come to a consensus on one of those narratives in time to stop Glenn Youngkin’s victory in Virginia.

We are told that critical race theory doesn’t actually exist but also that it’s a good thing and also that if it was bad we would deserve it because our white privilege needs to be punished.

Democrats and the media used the same lie as Nicole Wallace and MSNBC in an attempt to convince Virginians that CRT didn’t exist. It’s really incredible that publications which make any pretense to being objective are unabashedly repeating something so easily disproven.

The fact checkers have missed this one but Virginia parents have not. Youngkin’s victory proves that the brazen denial of reality didn’t convince many voters.

The CRT denials are pedantic anyway; everyone knows that anti-American leftist narratives have infected school curricula, regardless of which academic term is used.

In this case, however, we know that the term “critical race theory” was explicitly being used by McAuliffe and his people before it became a major controversy this year.

The Nicole Wallace lie was even more pathetic than most but that’s what we’ve come to expect from this hysterical woman and her employers at MSNBC.

Wallace, going farther than the standard denial that CRT is being taught in public schools, claimed on air that critical race theory “does not exist.”

This is objectively false. It’s the definition of fake news. Critical race theory, regardless of what one thinks about it, is a term which has been in use in leftist circles for years to describe a set of ideologies which most Democrats already subscribe to.

What is Wallace getting upset about (other than losing)? Critical race theory preaches the dismantling of white privilege and a redacting of American history to frame white racism as the source of all evils in this country.

That’s exactly what MSNBC promotes on a daily basis, along with the establishment of the Democratic Party and the rest of the mainstream and corporate media.

Leftists already knew that critical race theory was becoming a losing issue for their candidates. McAuliffe and his allies had been trying desperately to shift attention away from the topic as Youngkin surged after making it a focus of his campaign. Now they’re coping with the loss by lying shamelessly about it.

For the last year several hundred people have gathered together in Portland, Oregon to take part in a…
byScott Moore 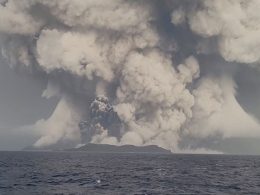 The scale of the colossal volcanic eruption near Tonga is best understood from space; satellite videos captured the…
byScott Moore