A visitor to Crater of Diamonds State Park in Arkansas made a remarkable find during a casual visit to the park. You can probably guess what it was. Noreen Wredberg spent less than an hour searching the park before she came across a 4.38-carat yellow diamond plainly visible on the surface. Diamonds are actually found practically every day at Crater of Diamonds State Park but the specimen Wredberg and her husband stumbled across has been the best find this year.

An ideal day for diamond hunting

Retired California natives Noreen and Michael Wredberg were visiting Arkansas in September when they decided to stop at Crater of Diamonds State Park to try their luck.

Visitors are invited to search for diamonds at the park and they are allowed to keep anything they happen to find on site.

The park reports that an average of one or two diamonds are found each day. Most of these are much smaller than the find made by the Wredbergs.

The couple was planning to simply enjoy the experience of searching for diamonds and did not really expect to find anything significant.

Fortunately for them, their visit to the park happened to follow a period of rainfall. With the soil drying out and the sun shining, conditions were perfect for finding something.

Noreen Wredberg did indeed quickly come across a pear shaped and lemonade colored diamond waiting on the surface to be found.

Visitors keep what they find

A farmer who owned the land in 1906 first discovered the abundance of diamonds in the area and since that time at least 75,000 have been found.

In 1924 miners at what would become the park unearthed a 40.23 carat white diamond which was subsequently given the name Uncle Sam. It remains the largest diamond ever found in the United States.

Later owners and the State of Arkansas realized that there was more value in allowing tourists to try their luck than there would be in continued mining operations.

The abundance of diamonds in the area is a result of ancient volcanic activity which brought an exceptional quantity of diamonds and other minerals to the surface.

Visitors who pay the fee to search are free to keep any diamonds or other stones found on the site, which is routinely plowed to ensure that finds are still common.

The Wredbergs have named their find “Lucy’s Diamond” in honor of their kitten, who has tints of yellow in her fur which resemble the color of the diamond.

A 72-year-old man was just arrested on drug charges in Florida. He’s accused of being a major drug…
byChristopher Dorsano 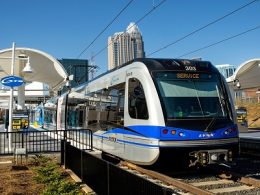 Naked Farmers Bare All to Promote…

The sky is the limit for ways to promote a cause, a product or a service. Promotions can…
byPatti Walbridge

Israeli archaeologists investing the harbor of the ancient city of Caesarea Maritima have discovered two shipwrecks, including a…
byScott Moore

A Florida man has been ordered to pay $30,000 in fines for not mowing his grass after a…
byScott Moore