One member of Antifa at least has had to face consequences for his actions. Davon De-Andre Turner has been sentenced to three years in prison for setting fire to a Minneapolis police station during the initial bout of riots that followed the death of George Floyd last year. Along with two others, Turner was found guilty of an arson attack on the police station in which he used a Molotov cocktail to start a fire after breaking into the building.

Abundant evidence  showed that Turner and other Antifa rioters had travelled to Minneapolis equipped to start and spread fires.

The arrested individuals were part of a mob which broke into the Minneapolis Police Department’s Third Precinct during the Summer riots which consumed the city.

Turner, with his comrade Bryce Williams, set a fire with their Molotov cocktails which was then intentionally fed by others in an attempt to destroy the building.

Minneapolis was devastated by the riots which occurred after the death of Floyd, with similar fires becoming a familiar sight subsequently across many American cities.

Turner is a rare exception as an Antifa member who is facing punishment for his actions, as few others have been charged given the extent of their participation in BLM riots last  year.

Some consequences for some rioters

A three year sentence in federal prison is likely one of the more extreme punishments which will come from the Antifa rioting.

The group has spent the past year rioting almost constantly in Portland , Oregon and have largely escaped any crackdown, managing to turn their riot streak into a long-term occupation of the leftist haven city.

The short sentence given to Turner is dwarfed by the severity of the punishments being faced by those who have been arrested in relation to the January 6 protest at the capitol.

The sentencing of Turner and the others is likely not a sign of any renewed push from federal law enforcement to target the left wing group.

Still, the fate of This Antifa member is proof that there are some actions which even this far left group is still unable to quietly get away with.

Letting Your Grass Get Too Tall Could Land You Over $30k in Fines This Season...Federal Judge Decides

Colorado is poised to enact legislation which would provide free contraceptives for illegal immigrants living in the state.…
byScott Moore

The Biden Administration is making emergency housing vouchers available to illegal immigrants. The Department of Housing and Urban…
byScott Moore 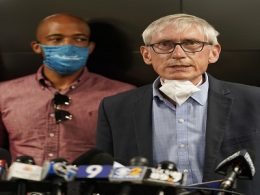 A Johns Hopkins professor and surgeon says that the coronavirus pandemic could be “mostly gone” by April. But…
byRyan Michael