You could blame it on the coronavirus. You could blame it on the incredible security risks. But if Biden’s show was as overwhelmingly welcomed as the MSM would have you believe, Washington DC wouldn’t be so heavily locked down. People would be excited to see him, he’s a rock star for the Democrats!  Democrats maybe scared to death.  The MSM needs to keep up the facade.

The MSM has plenty of covering up to do

You’re welcome to believe he’s deliberately keeping it small to “keep people safe” from COVID. The media still ignores the numbers on their own CDC website that suggests COVID deaths are a fraction of that 399,000.

It’s going to be virtual. Are you taking your oath in hiding Joe? It stands to reason. Tony Allen is the CEO of the inauguration committee. He assured us that, “There are many grand traditions to the inaugural, and we plan to honor them by highlighting more of our nation’s people than ever before while keeping everyone safe,”

The MSM wants to still make it look traditional

When it’s going to be anything but. The fencing alone is reminiscent of somebody who was not elected but appointed. There will be a swearing in ceremony, a visit to the Arlington cemetery, a virtual parade and a prime time special.

You need room for a parade, even a virtual live streamed one. Or is it “re imagined”?

The MSM has to account for a tiny crowd

Many dignitaries commonly show up for these and crowds spill out everywhere. It’s history, an event worth witnessing. Every person entering can and should be checked so this isn’t a problem.

The National Mall is closed. Everything is closed. In a break with tradition, Trump will not be attending understandably. He’s been savaged for four years, he’d be savaged again. Pence however, will be attending. Rep. James Clyburn is the co chair of the Biden inaugural committee. He suggested a couple thousand people would be there. It’s supposed to “resemble the state of the union”. There was a lot more people at Trump’s inauguration.

Washington DC is worried about pro Trump protestors. You’re far less likely to need to deal with Trump supporters than you are with people that the Democrats took a knee for, ANTIFA and BLM. 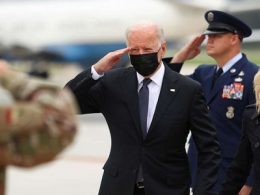