Iowa voters love President Donald Trump and they showed it in a HUGE way Thursday night. As the impeachment circus wrapped up in Washington, with Democrat’s hopes going down in flames along with it, President Trump showed the Democrats how to do some real campaigning.

The state of Iowa is a crucial battleground because the timing of their primaries puts them at the starting gate. The sea of support at Thursday’s rally in Des Moines showed the whole world that Trump’s already far out in front of the democrat pack.

As usual, President Trump stuffed the crowd in until all 7,152 seats at the Knapp Center in were taken and there were still at least a thousand more people outside. The overflow crowd was glued to the big screen TV in spite of the sub-freezing cold. As the Washington Examiner reports, “Of course the Trump event dwarfed those of any of his Democratic rivals.”

Joe Biden is so shaken up by everyone hounding him about his son Hunter Biden, that he forgets what state he’s in. “He’s in Iowa, he says, ‘Great to be in the great state of Ohio,’ and they say, ‘Joe, you’re in Iowa.’ You can’t do that,” the President laughed.

It all came down to the issues. President Trump laid out all of his accomplishments while emphasizing that all the Democrats do is whine and waste everybody’s time. Democrats offer the exact opposite of what the conservative voters want, while Trump delivers the goods. Iowans understand that quite well. They like results, not a lot of useless nanny-state nonsense.

“Democrats stand for crime, corruption and chaos, Republicans stand for law, order and justice,” roared Trump. Now that the wall is being built, with the first hundred miles already in place, it’s time to send Mexico the long overdue bill.

Even though we’re recouping the money through the new trade deal, Trump has a point to make. “Illegal aliens from Mexico are going to pay for the wall… through remittance, 100 percent.”

As far as the crippling regulations that progressives like to call the “Green New Deal,” Trump warned Iowa farmers what that would mean to them. “They would kill your cows. If we don’t win, your farms are going to hell.”

Cop Killer Gets LIFE IN PRISON

Justice was served. Stephan Cannon, 26, was sentenced to life behind bars for killing the retired police captain…
byPatti Walbridge 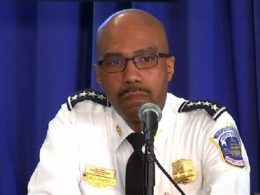