Oh Nancy, it’s easy to talk tough when you’re surrounded by armed security. Some of those insurrectionists were PAID to do it. And some understand war time tactics such as disrupting supplies and acquiring sensitive information, like your laptop.  You had to talk tough after it was found out you actually didn’t ask for extra security.  Your security chief didn’t want the blame so he just left.

Nancy and the Democrats are still scared

That this happened at all but she needs to put up the bravado front.  Nancy was sure the insurrectionists were going to kill her.  If you didn’t lust after power and were willing to work with Trump rather than fight him tooth and nail, you wouldn’t be facing this.

She said she wasn’t scared. Her heels were a weapon. “Well, I’m pretty tough. I’m a street fighter. They would have had a battle on their hands. I was never personally afraid because I had so much security for myself. I was afraid for everybody else, and I’ll never forgive them for the trauma that they caused to the staff and the members.” Why should everybody else be afraid, there was plenty of Capitol security, right? Or did you not want to upset the “optics” by ordering more?

Because she thought she was going to die. Nancy may have consoled her at some point. Right on cue, Alexandria thought it would be good to talk about the trauma.  Never waste a good crisis, right?

Richard Barnett of Gravette, Arkansas was shown on video lounging at Pelosi’s desk after going through her office.  Get what you can find that might help the opposition.

Nancy and the Democrats need to stay on their toes

The 2020 election was a fraud and everybody knows it. Trump himself said he’s not done yet. After working with him for a couple years she knows he’s up to something.

Another insurrectionist, a Riley Williams, played a part in confiscating Nancy’s laptop. People that got in there did what they could to work in the shadows because that’s how it’s going to have to be done.

Nancy made it sound like she’s going to nail them

The street fighter is gonna get ya! We’re shaking in our boots, Nancy. She wants legislation to increase security and wanted an investigation.

Where you might appear to destroy people, the American people will find out. What you seek to tear down, Americans will come in behind and give those targets our support. You might have a lot of power, but there’s more of us. Bring it.

The famous ‘Trump House’ in Pennsylvania was the target of an attack Thursday night. The house, painted top…
byStaff Writer 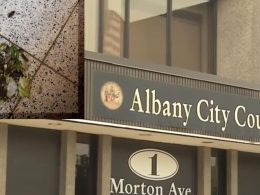