Kids shouldn’t be walking through filth. This is America and we can do better than that. Drug addicts are all over San Francisco and have been for some time. Ricci Wynne was helping kids get off a local transit line and shot a Twitter video of what the children step into. He kept stressing to “be safe” then showed the squalor. Politicians, including Pelosi, are capable of dealing with this but they don’t so he tagged them.

No reason for this filth

These children where getting off the 14 transit line in #SanFrancisco #California on 8th and mission this is no back ally this is a main artery in our city that has been hijacked bye drug dealers and now it is Pure filth ! #America #DrugFreeSociety #BidenIsAFailure #Fentanyl

A main area is filth

It’s not a back alley, it’s an area artery at 8th and Mission. This is the Tenderloin district which is so bad Mayor London Breed called it a “state of emergency” in December.

Mayor Breed didn’t help his situation at all when he sought to defund police due to the Black Lives Matter movement. He’s being politically correct but that doesn’t help the problem.

The filth needs a firm hand

Former District Attorney Chesa Boudin was the opposite of Mayor Breed. Boudin came into “office promising not to prosecute so-called ‘quality-of-life’ crimes like public urination.” A Soros-funded District Attorney was recently shown the door in a recall election.

The San Francisco Chronicle hasn’t been reporting favorably on conditions. 645 people died in 2021 from drug overdoses. That’s down from 711 deaths in 2020. Fentanyl is the worst culprit with methamphetamines right behind. Parts of San Francisco are okay but on the whole it’s gone downhill. 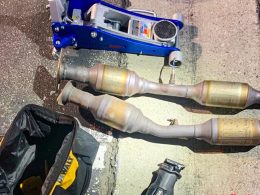