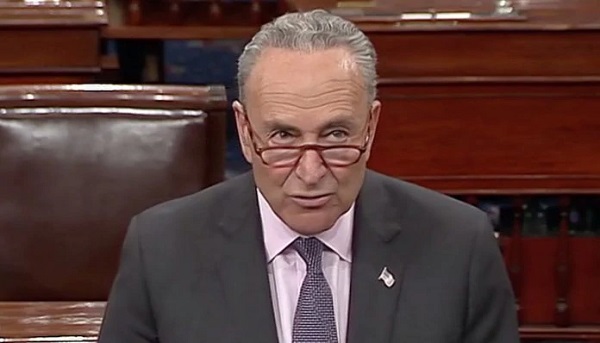 Senate Minority Leader Chuck Schumer (D-NY) will introduce legislation to keep President Trump from signing the stimulus checks. It’s the “No Politics in the Pandemic Recovery Act” or “No PR Act”. It keeps taxpayer money from being used toward any “promotional activity”, which includes signing your name on the stimulus checks. Schumer hopes to be adding this to the next stimulus bill. Republicans call this a petty move.

Schumer is the pot calling the kettle black

The joke in Washington is that Schumer is the publicity hound. If there’s a camera in the area, you can bet he’ll be in front of it.

“Trump unfortunately appears to see the pandemic as just another opportunity to promote his own political interests,” said Schumer. “The No PR Act puts an end to the president’s exploitation of taxpayer money for promotional material that only benefits his re-election campaign.”

In addition, “delaying the release of stimulus checks so his signature could be added is a waste of time and money.”

Senator Ron Wyden (D-OR) chimed in with a letter sent to Treasury Secretary Steven Mnuchin. He asked for “details about how you made this decision to benefit the president politically,which may delay delivery of critical funds to millions of Americans struggling to pay the rent and put food on the table.”

We don’t already have too much to do, Senator.

“President Trump unfortunately appears to see the pandemic as just another opportunity to promote his own political interests,” Schumer said to Politico. “The No PR Act puts an end to the president’s exploitation of taxpayer money for promotional material that only benefits his reelection campaign.”

Trump Derangement Syndrome will probably continue til long after the President is out of office. Schumer knows Trump doesn’t need a reelection campaign and it probably infuriates him. The people who elected him are happy with the job he does so we happily donate. Plus Trump uses own money.

It was actually Mnuchin’s idea. “We did put the president’s name on the check. That was my idea. He is the president, and I think it’s a terrific symbol to the American public.” Mnuchin likely sees it as not only historical but inspirational and patriotic. Trump understands the need to keep Americans afloat. The evidence is in him pushing to reopen America as soon as possible. Let’s get back to work!

Republicans aren’t delaying this. They know full well the public needs this.

Both Schumer and Pelosi are pointing fingers at the opposing party when they are the problem. In addition to the check, Trump is sending letters informing people of their payment. Does anybody remember the Affordable Care Act was called Obamacare? Would Senator Schumer prefer to have HIS signature on the checks?

Among the places Trump and Schumer have had conflict is in the COVID-19 response. If Trump had shut down the US as soon as the coronavirus was mentioned, it would be considered acting too quickly and being draconian. As a result, he does what he sees a need to, guided by medical and science professionals. So Schumer is pushing for a committee to investigate Trump’s response to COVID-19. Anything to slow Trump down. Thankfully he’s bigger than that.