Martha McSally better be buckled up tight because she’s in for a wild ride. Her Senate seat is packed with explosives and the “reject” is about to be ejected half-way to orbit. Independent Arizona conservatives are still furious at the way the RINO got forced down their throats. There is little doubt they’re primed to send her right through the roof this time. Dan McCarthy had a perfect opportunity to step up and defend Republican Party principals but he turned out to be a dud. He started weak then fizzled out altogether. That means “all systems go” for former astronaut Mark Kelly, even if he is a Democrat.

Democrats are totally stunned by what’s happening in Arizona, but not half as stunned as the Republicans are. The Democrat candidate, Mark Kelly, is virtually being invited into a Senate seat. The Arizona GOP simply can’t accept the fact that they aren’t conservative enough for Arizona voters.

If they had stuck to their declared party principles over the years, they wouldn’t be in this position. Now that they are, they refuse to change. Hopefully this will be the wake up call they hit the snooze button on in 2018. Arizona will continue to reject any RINO they try to run.

The state of Arizona was stabbed in the back by Jeff Flake, time and again. Somehow, after a long and faithful conservative career, John McCain slipped over to the “moderate” dark side, virtually rubber stamping anything Obama suggested. Hard-right Arizona voters were outraged and stamped their foot down. When their favored candidate, Dr. Kelli Ward, suddenly disappeared from the GOP ballot, replaced by confirmed RINO Martha McSally, they decided to send a clear message.

If the GOP wants Arizona to elect a Democrat, they will. Until Republicans stop giving the independent and Libertarian voters a choice between a Democrat who admits it and one in the closet, they will reject the sleeper cell every time. In 2018, independent conservative Arizona voters elected Democrat Kristin Sinema with eyes wide open. So far, she’s been more helpful and cooperative than Jeff Flake ever was.

After reject McSally lost, RINO Governor Doug Ducey turned around and double-crossed the voters and appointed her to the seat vacated by John McCain. Independents were livid. They started counting the days until they could go back to the polls and vote for anyone but her. A rock with a smiley face painted on it has a better chance. That’s pretty much what Dan McCarthy turned out to be. McCarthy still has a much better chance of beating McSally than Libertarian Barry Hess, but he doesn’t stand a chance against the Democrat. Adding to the chaos, this Democrat proves that DINO’s aren’t extinct after all.

Not only is Mark Kelly a former astronaut, he’s married to one of Arizona’s favorite former congresswomen, Gabrielle Giffords. According to one political analyst, Kelly “has staked out a position as a reasonable human being.” Not only is he a “science and engineering guy,” he “doesn’t think Atlas Shrugged is a work of philosophy.” More importantly, he’s not a reject.

It’s strange for some of the most conservative voters in the country to overwhelmingly accept a Democrat candidate without even really caring where he stands on the issues. It matters more to Arizonans that he’s honest and lives up to his claims.

Video: Adam Schiff Doubles Down on Impeachment...Here we go again

Joe Biden is rewarding Cindy McCain for her support during the 2020 election with a new position. The…
byStaff Writer 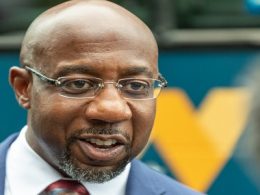 Georgia Senator Raphael Warnock is working to ensure that Georgia becomes a permanently blue state. The Senator is…
byStaff Writer