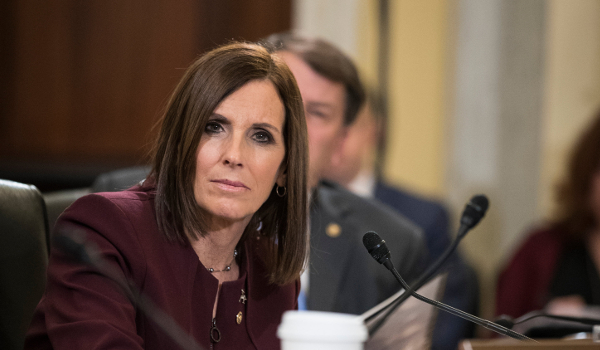 Arizona’s lame Republican In Name Only Senator Martha McSally is tripping. She thinks throwing a high profile tourism encouragement bribe on the table will affect her dismal chances in November. Her American TRIP Act is welcomed with strong support in Arizona. A lot stronger than the support for McSally herself. The voters rejected her bid for Jeff the Flake’s seat but she ended up with John McCain’s. For now.

While she’s still a senator

Once a RINO, always a RINO. Martha McSally was already rejected once by independent conservative voters. Being a senator is only temporary though. While she is still in the slot, McSally decided to sponsor a really popular bill, hoping it will help her stay employed. When the list of political names supporting McSally for introducing that bill is longer than the description itself, you can smell the fear rising from the press release. Her American TRIP Act may be welcomed with strong support but she’s reached her peak and it’s not likely she’ll stay in office after November.

Her proposed legislation encourages Americans “to support the tourism industry following the COVID-19 pandemic.” She wants to shell out tax credits “to Americans who spend money on lodging, entertainment, and other expenses related to travel in the United States and its territories.” McSally is especially hoping you’ll spend some of those tourism dollars in Arizona, home to the Grand Canyon. The town of Scottsdale is a mecca for world class shopping and dining. All of Arizona was hit hard by the loss of tourists and Scottsdale was hit even harder by looting.

Getting everyone back to work, especially her

“The American TRIP Act is about getting more than 180,000 Arizonans and over 9 million Americans who are employed by the tourism and hospitality industries back to work,” the senator promises. “If Americans aren’t traveling, then millions of other Americans have no job to go back to.” McSally shares their fears.

“That means millions of Americans are unable to provide for their families, including paying rent or a mortgage, health care costs, or buying groceries.” She wants you to go visit grandma. She thinks a tax credit later will give folks the cash they need now “to visit grandma and grandpa, take a trip to the Grand Canyon, and so much more.” Not, of course, until “it is safe to do so.”

She wants you to believe her primary motivation is getting the economy going. “Igniting this sector of the economy is key to a successful recovery and critical for Arizona jobs and economy.” The biggest job she’s trying to save is her own. She has a republican challenger, Dan McCarthy, who is struggling to act like he has half a clue. It remains likely that McSally will be the one to face off against democrat Mark Kelly in November. Voters are still smoldering after double crossing Governor Doug Ducey appointed McSally to fill John McCain’s seat. They can’t wait to get to the polls and reject her again.

Independent conservative voters are determined to keep sending the same message to the Arizona branch of the GOP until it’s finally heard. No RINO’s. If that means electing democrats then so be it. Better an honest democrat than a closet democrat who instead of a conservative is a liberal sleeper cell in disguise. In Mark Kelly’s case, he also happens to be a former astronaut and married to former republican lawmaker Gabrielle Giffords. That makes it so much easier to vote for him than a renegade. So far, Kyrsten Sinema has been a lot more cooperative than RINO Senator Jeff Flake ever was.

Here are the 33 Lies Joe Biden Told America During First...

Alert: People are Being Forced to Quit Their Jobs Over Showing...

After Husband Catches Cheating Wife, He Forces Her to Do Something...