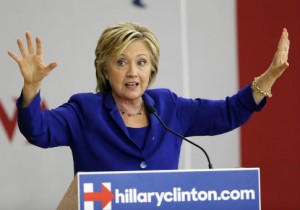 Anti-gun disciple, Hillary Clinton, calls Second Amendment supporters ‘domestic terrorists.’ On Friday, in reference to a Newsweek article on the ongoing Michigan protests by patriotic citizens, Clinton tweeted that “Armed men storming a legislature to disrupt its democratic proceedings is domestic terrorism. It cannot be tolerated.”

Armed men storming a legislature to disrupt its democratic proceedings is domestic terrorism. It cannot be tolerated.https://t.co/NcCFgA5COE

The Newsweek article, that Clinton referenced, covered the protests in Michigan, where Governor Gretchen Whitmer has imposed some of the strictest ‘stay-at-home’ orders in the country. Many Michigan citizens have been peacefully protesting at the state’s capital in Lansing. Starting with ‘Operation Gridlock’ in April, the protests, which included individuals demonstrating their Second Amendment rights, have caused liberal alarm.

The leftist-leaning Newsweek article, that Clinton cited, claimed that the protesters have a Facebook page that included posts “for Whitmer to be hanged, lynched, shot, beaten or beheaded. One suggested crowdfunding sources to hire a hitman to kill her.” However, Newsweek did not provide any links, nor screenshots, of such accusations.

Clinton’s Democrats and the 2nd Amendment During the Panic

Many tyrannical Democrats have used the Coronavirus panic as an excuse to move against the Second Amendment. One of the first examples was New Orleans Democratic Mayor LaToya Cantrell, who signed an emergency order during the initial wave of the Coronavirus pandemic. Her order stated that Cantrell is “empowered, if necessary, to suspend or limit the sale of alcoholic beverages, firearms, explosives, and combustibles.”

In Massachusetts, Democratic Governor Charlie Baker also imposed draconian anti-Second Amendment measures on the citizens. He, as well as other Democratic governors, deemed gun shops as ‘unessential’. Obviously, to the Democrats, a citizen’s ability to defend himself or herself is not essential during an overblown pandemic. Fortunately many patriots in Massachusetts rallied against the liberal governor.

Richard Howell, a spokesman for a pro-Second Amendment Massachusetts group, correctly stated, “We want to maintain our rights right now with the pandemic you have criminals being released from jail. You have potential unrest out there as long as people are out of work. We want to be able to defend ourselves and our rights and this is our way of making our stand.”

Clinton, the Democrats, and mainstream media are extremely selective when covering citizens who demonstrate their Second Administration rights. As a fallout of the death of Ahmaud Arbery, whose passing away was blasted throughout the mainstream media, groups of African-American men began to ‘patrol’ the mainly white neighborhood where Arbery died.

Arme black men walking through the white neighborhood where AhmaudArbery was murdered pic.twitter.com/9qe1UtKIsP

Although this incident displays Americans exercising their Second Amendment rights, the mainstream media did not cover this event, even though it has over sixty thousand retweets. Undoubtedly, Newsweek will not have a feature article of these individuals. Do not expect Hillary Clinton to retweet this either.